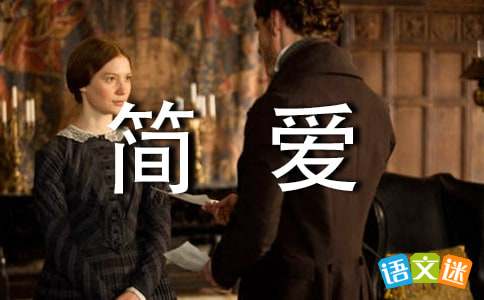 Jane. Love living in a parents, sponsor, grew up under the environment of treatment with peers, aunt abandon, cousin contempt, cousin insults and beating of a child… this is the dignity of the ruthletrample, but perhaps because it all, Jane. Love and faith of infinite indomitable spirit, a kind of inner personality can win.

In rochester, she never because he is a teacher and the family status meanness, but that they feel inferior is equal. Should not because she is a servant, but not respected by others. Also because of her integrity, noble and pure heart, no pollution, secular society for the shock, and rochester her as a spiritual and equality in the conversation, and slowly and deeply in love with her.

Jane Eyre, is a poor but aspiring, small in body but huge in soul, obscure but self-respecting girl. After we close the covers of the book, after having a long journey of the spirit, Jane Eyre, a marvelous figure, has left us so much to recall and to think:

We remember her pursuit of justice. It’s like a companion with the goodness. But still, a virtuous person should promote the goodness on one side and must check the badness on the other side.

We remember her self-respect and the clear situation on equality. In her opinion, everyone is the same at the God’s feet. Though there are differences in status、in property and also in appearance, but all the human being are equal in personality.

We also remember her striving for life, her toughness and her confidence…

When we think of this girl, what she gave us was not a pretty face or a transcendent temperament that make us admire deeply, but a huge charm of her personality.

This is a story about a special and unreserved woman who has been exposed to a hostile environment but continuously and fearlessly struggling for her ideal life.The story can be interpreted as a symbol of the independent spirit.

It seems to me that many readers’English reading experience starts with Jane Eyer.I am of no exception.As we refer to the movie“Jane Eyer”,it is not surprising to find some differences because of its being filmized and retold in a new way,but the spirit of the novel remains----to be an independent person,both physically and mentally.

Jane Eyer was a born resister,whose parents went off when she was very young,and her aunt，the only relative she had，treated her as badly as a ragtag.Since Jane’s education in Lowwood Orphanage began,she didn’t get what she had been expecting——simply being regarded as a common person,just the same as any other girl around.The suffers from being humiliated and devastated teach Jane to be persevering and prize dignity over anything else.As a reward of revolting the ruthless oppression,Jane got a chance to be a tutor in Thornfield Garden.There she made the acquaintance of lovely Adele and that garden’s owner,Rochester,a man with warm heart despite a cold face outside.Jane expected to change the life from then on,but fate had decided otherwise:After Jane and Rochester fell in love with each other and got down to get marry,she unfortunately came to know in fact Rochester had got a legal wife,who seemed to be the shadow following Rochester and led to his moodiness all the time----Rochester was also a despairing person in need of salvation.Jane did want to give him a hand,however,she made up her mind to leave,because she didn’t want to betray her own principles,because she was Jane Eyer.The film has finally got a symbolist end:Jane inherited a large number of legacies and finally returned.After finding Rochester’s misfortune brought by his original mad wife,Jane chose to stay with him forever.

I don’t know what others feel,but frankly speaking,I would rather regard the section that Jane began her teaching job in Thornfield as the film’s end----especially when I heard Jane’s words“Never in my life have I been awaken so happily.”For one thing,this ideal and brand-new beginning of life was what Jane had been imagining for long as a suffering person;for another,this should be what the audiences with my views hoped her to get.But the professional judgment of producing films reminded me to wait for a totally different result:There must be something wrong coming with the excellence----perhaps not only should another section be added to enrich the story,but also we may see from the next transition of Jane’s life that“Life is like a box of chocolates,you never know what you would get.”